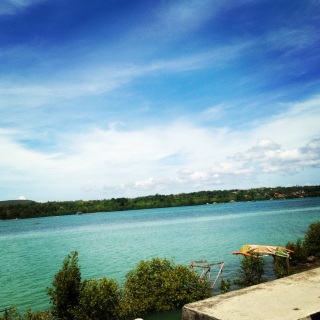 Bohol was one of the wonderful places that I visited. The place has many things to offer. When we arrived in Tagbilaran Domestic Airport, Paul Incon of Incon Bohol Tours was already waiting for us.

Bohol is an island and it is the7th largest island in the country. Touring Bohol is really exhausting but every calorie we burned and second spent was worth it. 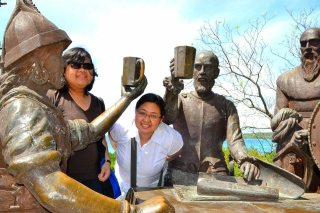 Blood Compact site in Tagbilaran, Bohol is a great symbol of friendship and foreign relations. The Filipino term for “Blood Compact” is “Sandugo” which is a ritual in the past for establishing friendship. What they did during the ritual is cut a small wound on their arms then pour the blood in a single cup mixed with wine. Then, they divided it into two glasses for both of them to drink. No one should leave until the glasses are empty. The literal meaning  of Sandugo which is “one blood” is clearly displayed in this ritual.

The Baclayon Church or the Church of Our Lady of the Immaculate Conception in Baclayon, Bohol is one of the oldest churches in the Philippines. According to an inscription on its wall, it started as a wooden church in 1596 which was established by Spanish missionaries Fr. Juan de Torres and Fr. Gabriel Sanchez. This church was even referred to as the first seat of Spanish Jesuit Missionaries. Their headquarters was later moved in the inner part of Loboc, far from the shore, because of their fear of Moro marauders. 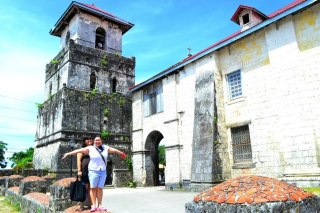 It was only in 1717 that a construction of a new church for Baclayon was made. It is said that there were 200 native forced laborers who constructed the church using coral stones cut into blocks. What I found amusing is their use of million egg whites as cementing material which is something I haven’t heard before. I’ve seen houses and buildings built where eggs were used as wel—but as food to the laborers, not as a cement.

Python, Prony the name of the python. It is said to be the largest captive python. First, I did not feel any nervousness, but when the time when my sister and I has come to enter the cage, I never experienced to get closer to any reptile. According to its caretaker, the python was about sleeping that time, because he was fed, so, there’s no reason to get frighten.

The Loboc River Cruise can’t be something optional if you don’t want to miss a superb experience in your Bohol country side tour. Imagine yourself enjoying a buffet lunch in a festival themed floating restaurant while enjoying the cool breeze blowing inside it as it traverses Loboc’s clean river which is surrounded by lush green plants. It was truly an amazing experience that I never expected. Eating lunch has never been this fun and relaxing.

The fun doesn’t stop there because they have a group of singers waiting to serenade you. You can even sing along with them! You don’t need to know their regional language because most of the songs they’re singing are popular English songs. 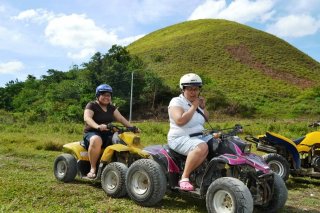 Chocolate Hills; these hills turn into colossal Hershey-kisses-like chocolates during the dry season when the grass covering them turns brown. Their total number is 1,268. Before we proceed to the deck, we experienced the ATV ride besides the chocolate hills. Charm and I had a amazing experience to ride in an ATV.

After getting a good look at the hills, we got awed by their majestic beauty. I really like their smooth curve shape which is very uncommon. There are plenty of hills here in the country but none of them are as nicely shaped and flawless like these. These hills truly deserve to be the symbol of the whole province.

Based on a scientific explanation about its origin—the Chocolate Hills are conical karst hills, called mogote, which were created by a combination of the dissolution of limestones by rainfall, surface water, and groundwater and their subaerial erosion by rivers and streams after they had been uplifted above sea level and fractured by tectonic processes.

The Philippine Tarsier is a sensational creature which is considered as one of the smallest primates in the world. Unfortunately, it already belongs to The World’s 25 Most Endangered Primates due to its vulnerability and the absence of law protecting it from hunters in the past.

Bohol province is one of the safe havens for these creatures. This island has many tarsier sanctuaries which help them repopulate. During our tour, we went to one of those sanctuaries which is the Tarsier Conservation Area in Loboc. The entrance fee is 60 pesos but if you’re a student the fee is only 50 pesos.

The moment we entered the sanctuary we were directed to the briefing area to know their site’s policies and to understand how to properly interact with the tarsiers. This is where we learned that the tarsier is a nocturnal type of creature which feeds on insects, lizards and small birds.

Because of that fact, we we’re told to strictly observe silence to avoid interrupting their sleep. The use of camera flash and touching them are strictly prohibited as well.  These creatures are so delicate to the point that it will commit suicide when it gets too much stress. 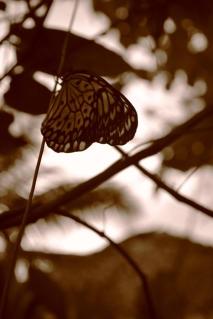 Butterfly Garden: The Simply Butterflies Conservation Center is a nice place to drop by after visiting the Chocolate Hills. According to their website, there are about 300 species of butterflies found in Bohol and over half are found in their conservation center.

Hanging Bridge: If you want a quick and mild thrill during your Bohol tour, you can consider passing by their famous Tigabo Hanging Bridge in Loboc. Its height is about 25 meters (82 feet) above the river. With an entrance fee of P20.00 only, it’s a good place to start if you’re trying to overcome your fear of heights.

It’s not every day that you encounter a bridge that is alive, it’s so alive that it reacts wildly in each step you make when crossing it. Make sure to treat it gently if you don’t want to feel its wrath. It can get very violent when provoked. The whole bridge is actually made out of metal—they just added some bamboo flooring to give it a native look.

We stayed in Dumaluan Beach Resort for our entire stay in Bohol. It is located in Panglao Island. What can I say the beach in Bohol is quite magnificent. The panoramic view is really relaxing.

Travel: The Blue side of Bohol